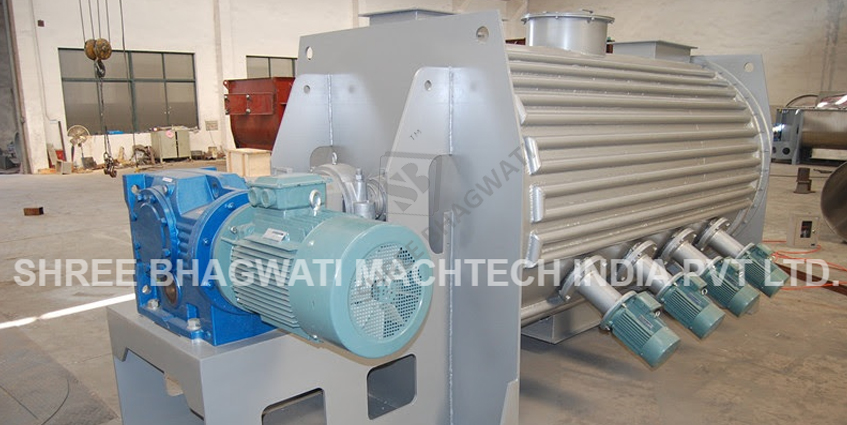 Shree Bhagwati supplies superior quality Plough shear mixer as Pharma Equipment. It is on its own shaft and requires additional equipments. Some sets of plough shears are install on the main shaft in disruption and incessantly, which avoid the addition dead zone in arrangement. When functioning, material in mixer tank move following the direction of the incessant vortex centrifugal force generated by the incessantly amalgamation plough shears, thus to attain dispersal, disperse and fast mixing of material. Some materials like fiber or some moist agglomerate material, high speed chopper are exceptional material and can be installed within mixer tank. The tank, then scatter and dispense these materials with amalgamation of plough shear mixing agitator. The high speed choppers are located at the barrel side downward angle of 45 degrees of the plough shear mixer, the chopper heads elongate into the barrel. The effective range of choppers, supplied with plough dryer, ensures the thorough mixing of materials and also shears in high haste.

Powerful auxiliary components:
The plough dryer incorporates numerous auxiliary mechanism, like honeycomb pressure jacket, sampling valve, weighing system, high speed chopper temperature sensor steam coil jacket, medium circulation jacket, etc. Dissimilar heat medium require with different jacket, it be able to use for heating and cooling, while, the temperature must be within 250 Celsius degree. If a diminutive quantity of liquid is necessary throughout mixing, spraying or atomizing unit is essential in order to combine the liquid consistently with the main constituent. The liquid-adding arrangement is essentially composed by the three parts: spraying nozzles, liquid storage pot and pressure source.

Application:
Plough shear mixer is intended and enhanced on basis of main stream mixing technique and it is appropriate for mixing multi-material. Plough shear mixer can be used for the procedure of solid powder material, granule material. It is also capable of performing course mixing in which there is a necessity for extra liquid. These mixers are extensively preferred for application in building material, chemical, food etc.

Flexible material selection:
Material of plough dryer can be chosen from SS304, 316L, and 321, carbon steel, manganese steel, as well different material can also be used in mixture. Material is dissimilar among the part of contact with the raw material and the parts don`t contact with the material. Exterior treatment for SS contains mirror polishing sandblasting, polishing, wiredrawing all can be used in changed parts of a mixer.

High efficiency unit:
The plough shear mixer comprises of plough heads which can be dismountable, providing an option of easier replacement. Wear-resistance treatment is complete on the plough, making the plough is more modified to the rigorous wear conditions. Dissimilar main shaft agitators can be capable of according to the properties of raw materials. 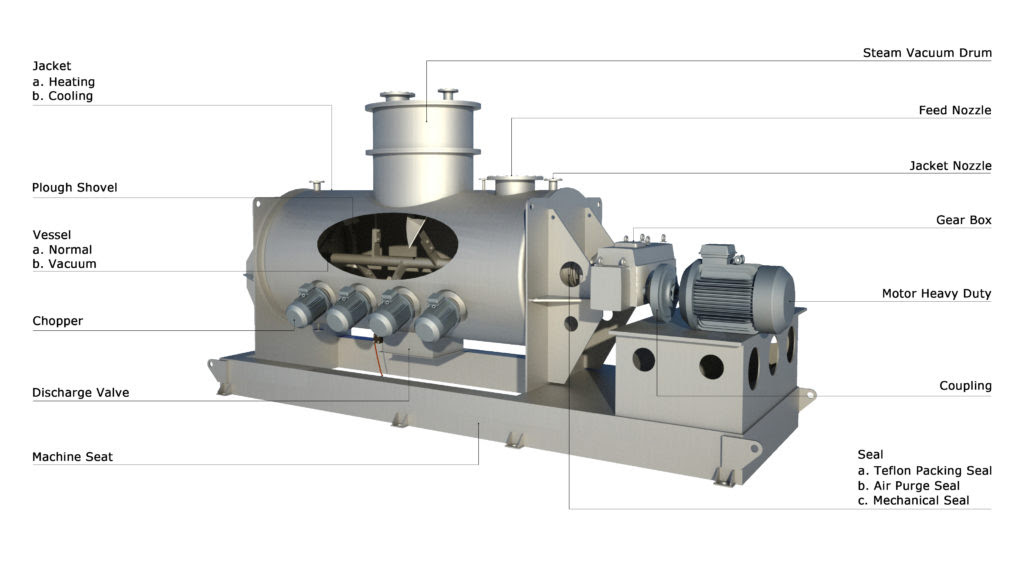 Plough shear mixer & dryer is a single shaft compulsory mixing equipments. Some sets of plough shears are installed on the main shaft in dislocation, which avoids the mixing dead zone in the  structure. While processing, the material in the mixer tank moves in the direction of the votex centrifugal force generated by the constantly blending plough shears, hence to achieve scattering, dispersing and fast mixing of material.

In a plough shear mixer for materials like fiber or some damp agglomerate, a high-speed chopper can be placed in the mixer tank for scattering and dispensing the materials with combination of plough shear mixing agiator.

The position of the high speed choppers is set at a downward angle of 45 degrees (barrel side) of the plough shear mixer and the chopper heads stretch into the barrel. While mixing, materials are brought to the effective range of the chopper and sheared at high speed.

Sloping blades or plough blades are set on single shaft. When plough mixer is operating, the material is continuously mixed by the special structure. The dead corner is avoided with radial and longitudinal movement simultaneously, hence highly accurate mixing is achieved. 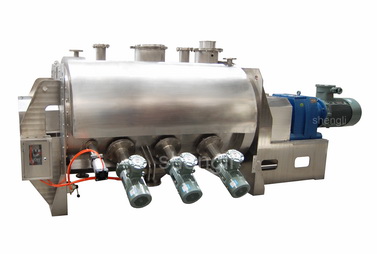 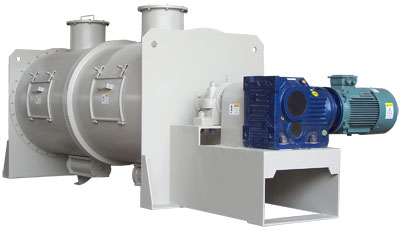 Plough mixer effectively manages material inflow. Due to the high-speed and shape of plough agiator, centrifugal vortex action, material in the plough mixer moves in three-dimension and mixed effectively. This type of mixer is most suitable for dry powder, small fiber, granule, liquid and paste with low viscosity. 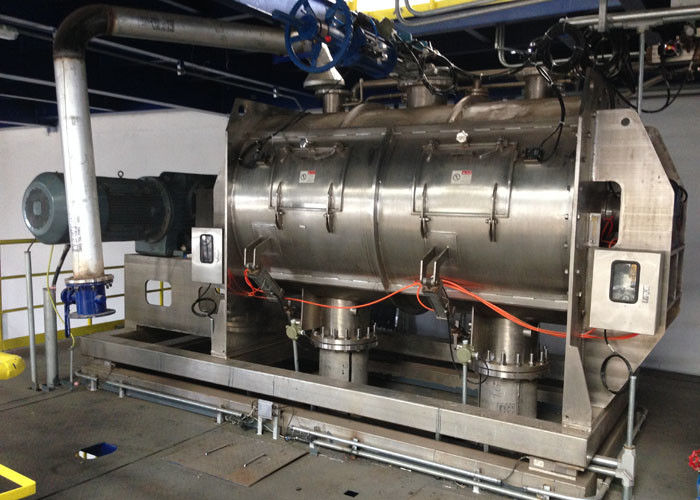 We specialize in mixing production line and related accessories 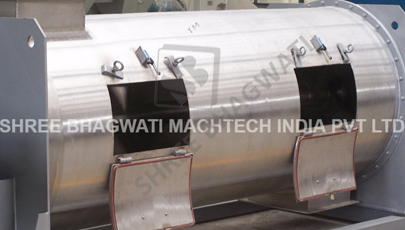 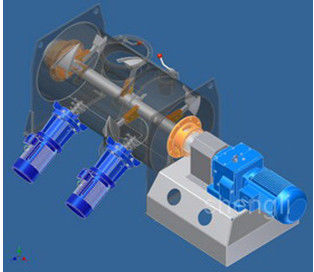 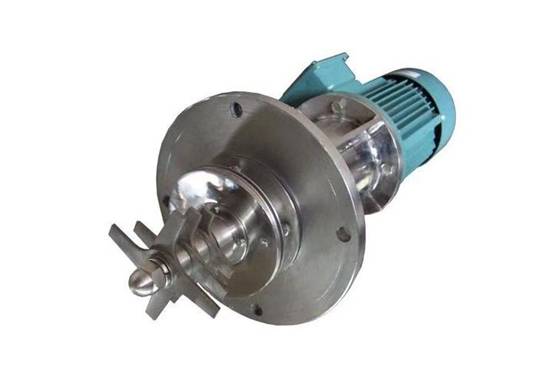 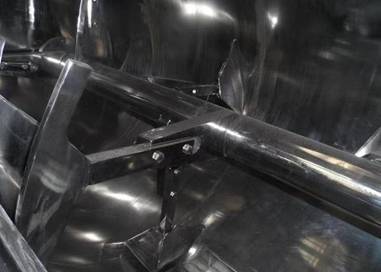 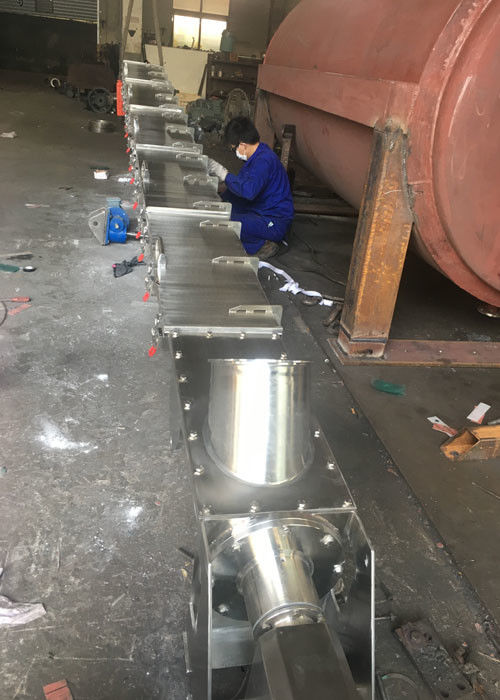 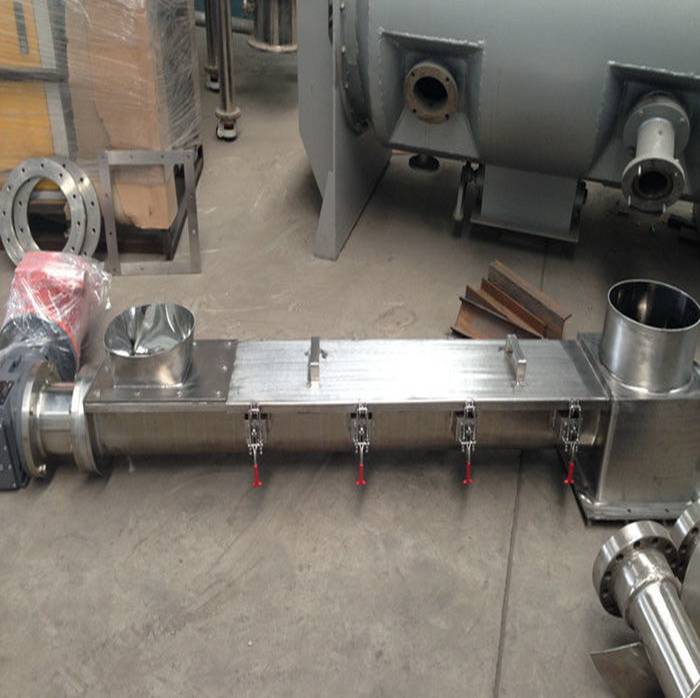 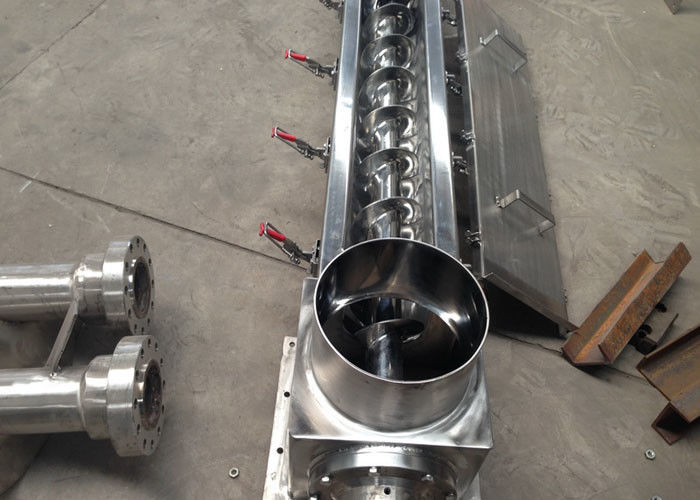 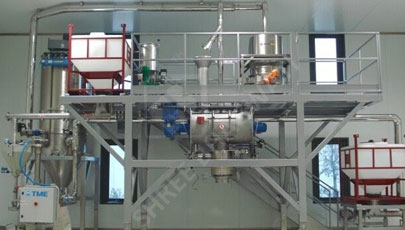